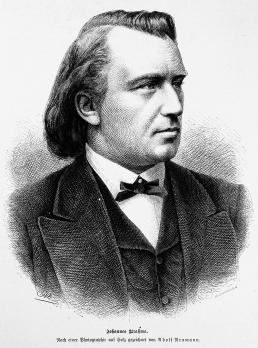 Johannes was the second child born to Johanna Henrika Christiane Nissen and Johann Jakob Brahms. His father learned to play several instruments, and earned a living playing in local dance halls. His mother was a skilled seamstress. Brahms’ parents married in 1830. His father was 24 and his mother was 41. Besides the fact that their finances were extremely tight, their age difference greatly influenced Johannes’ father to leave his wife in 1864.

Brahms studied mathematics, history, English, French, and Latin in private elementary and secondary schools. Once Brahms learned to read, he couldn't stop. His well-used library of over 800 books can now be seen in the Gesellschaft der Musikfreunde in Vienna. Brahms was given lessons on cello, piano, and horn. At the age of seven, he was taught piano by Otto Friedrich Willibald Cossel and within a few years was accepted (free of charge) into the instruction of piano and theory by Eduard Marxen.

Much of Brahms’ teenage time was devoted to reading, learning, and composing music. He developed a love for folklore including poems, tales, and music. In his early teens he started to compile a notebook of English folk songs. In 1852, Brahms, inspired by a genuine Minnelied poem by Count Kraft von Toggenburg, wrote the F sharp Piano Sonata op. 2. In 1848, Brahms became familiar with the mixing of Hungarian style and Gypsy style of music, hongrios; later apparent in his Hungarian dances.

In his early adult years Brahms, along with his friend Reményi, toured northern Germany from April to June in 1853. While touring he met Joseph Joachim, who later became his lifelong friend, in Göttingen. He also met Liszt and other prominent musicians. After the tour, Brahms went back to Göttingen to stay with Joseph. Joseph encouraged him to go meet more prominent musicians, especially the Schumann’s. Brahms met the Schumann’s on September 30, and became very much a part of their family.

In the 1860’s, Brahms’ style of music, apparent throughout the rest of his career, became more mature and refined. While in Vienna, Brahms met with Wagner. They listened to each other’s music, and afterward Wagner was known to criticize Brahms’ works; although Brahms’ claimed to be a Wagner supporter. Brahms spent the latter portion of the 1860’s touring much of Europe to earn money. In 1865, after the death of his mother, he began writing the German Requiem and finished a year later.

As a result of his travels, Brahms was able to collect an abundance of music scores autographed by the composers that wrote them. Because of his large circle of musical friends, he was able to give concerts all over Europe. His music and fame spread from Europe to America. After the death of Clara Schumann, he wrote his final pieces. A year later, Brahms was diagnosed with liver cancer. A month before his death, he was able to attend a performance of his 4th Symphony by the Vienna Philharmonic.