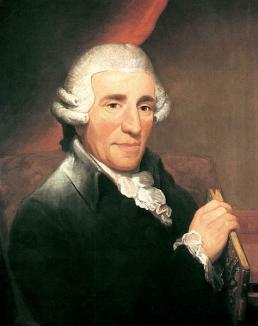 oseph Haydn rank among the most renowned personalities in music history. During his lifetime he has already been regarded as uncontested doyen among European composers.

His lifetime was directly concerned by a particular phase full of incisive historical changes. Starting from rural homes his musical career began as choir boy in the Saint Stephan’s Cathedral in Vienna and continued in his service for the aristocratic houses Morzin and Esterházy.  It was not until the age of 60 that he finally managed to emerge from the shadow of his service at Esterházy court and to initiate an international musical career,

By traveling to England he was finally able to enter the international scene in person which had already been conquered by his works.  In London the royal court official was passed around in the circles of British high society and he also functioned as conversation partner of the king, the heir to the throne and diverse members of aristocracy.  King George IV. And Admiral Nelson appreciated his works with the same passion as King Ferdinand IV. of  Naples and Friedrich Wilhelm II., king of Prussia.  His work even led him to the Habsburg court of Empress Maria Theresia and Emperor Franz Joseph II. However, all these exalted acquaintances, international honours and awards during his late years in Vienna have not spoiled his character. Haydn refused to become alienated from his roots and social status and he paid close attention that his straight personality would not become depraved.

His position in music history is prominent and unalterable. His work ranges from baroque music to a specific style which should enter the music history under the name of Viennese Classic. Haydn is regarded as one of its “fathers”. In his position of being the oldest member of the great trio Haydn-Mozart-Beethoven he functions as “pioneer” and “consummator”. He did not only operate innovatively in the field of instrumental music, which has been quite popular at the time, but he is also considered as ground-breaking in the field of the symphony and specifically of the string quartet which significantly owes its existence and characteristic as musical genre to Haydn’s initiative. He often provided compositional models and techniques which helped his younger colleague Mozart and his posterior pupil Beethoven to develop their individual artistic performances.

Next to Mozart and Beethoven other great composers and musicians such as Johann Nepomuk Hummel, Ignaz Joseph Pleyel, Luigi Cherubini rank among Haydn’s friends and admirers.

Joseph Haydn left a sublime oeuvre. In the course of his life and due to his almost infinite productiveness he composed over 1000 works. Haydn has not only set a standard in the field of instrumental music but also in all other aspects of musical art. Especially his German oratory “The creation”, which can be undoubtedly denoted as his main work, has entered the collective memory.