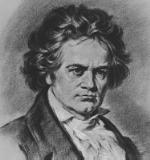 Ludwig van Beethoven was, and remains today, an olympian figure in the history of classical music. His influence on the last 150 years of music is unequalled; while generationally a member of the Classicist fold, he was in fact the first Romantic, and pre-figured virtually all music that followed the Romantic era as well. Perhaps no other composer in history wrote music of such exhilirating power and expressiveness; certainly no other composer did so against greater odds.

Beethoven was born in Bonn in 1770. His father, a music enthusiast, dreamed of molding his son into the next Mozart. Beethoven never exhibited the astonishing prodigy characteristics of his predecessor, but he was unusually talented, learning the piano, organ and violin at an early age. At 14, he was already proficient enough on the organ to receive a professional appointment. His family life was chaotic; his father was an alcoholic, and his mother died suddenly when he was only 17. After that tragedy, his domestic situation declined even more, and this condition - combined with support from Haydn - compelled him to leave home in 1790 and travel to Vienna to study composition.

In Vienna, Beethoven first studied with Haydn, but eventually became frustrated with that great composer's teaching methods, moving on to study with other composers. He performed frequently in salons of wealthy nobility, but strangely enough, did not perform in public until he was 25. But from this point onward, he was embraced by both the commonfolk and the aristocracy of Vienna, so much so that he never had to rely on court appointments or private patrons for his livelihood. He did receive stipends from admirers and friends, but he remained independent of the shackles of conditional patronage that frustrated so many of his contemporaries.

Beethoven was lucky in one sense; he rose to prominence in the musical world at a time when social strata were becoming more flexible, and the emerging power of the middle class provided him many opportunities for performances of his music for public audiences. This, combined with lucrative publishing arrangements, allowed him to live relatively well. He was not ignorant of the benefits of aristocratic support, however; throughout his career, he cultivated a romantic, moody and mercurial image with the upper class and leveraged this persona to achieve a social status equal to the Viennese nobility.

Beethoven was a master symphonist - the master symphonist in the eyes of most musicians and composers. His compositions for orchestra were revolutionary in his day; while he adhered to Classical musical forms, his melodies and orchestration were of such unprecedented power and beauty that they astonished even the most hardened listeners. Only his music achieved the unique combination of primal force and spiritual elevation that remains legendary to this day. In other forms - music for solo piano, violin sonatas, string quartets, and one opera, Fidelio - the same qualities prevailed. Always profound, inspiring and essentially tragic, his music defined the limits of human expressiveness in sound.

Early in the 19th century, as his career was reaching its zenith, Beethoven began to realize that he was growing deaf. This woeful affliction advanced quickly, throwing the composer into deep depression and making him increasingly unable to conduct and perform his works. He curtailed his public appearances and communication, eventually resorting to a notebook to communicate with his inner circle of friends and colleagues. His desperately agitated mind began to produce music that alarmed and terrified his contemporaries. By 1820 he was completely deaf, and he had become a recluse. He died seven years later, in furious emotional pain and resentment for the power that had ripped away his ability to enjoy his own genius.

Beethoven was a fascinating composer for so many reasons; among them the method with which he composed. Unlike Mozart, he did not write completed works in his head - he slaved over each composition, filling innumerable sketch books with his struggles to produce perfection. For this reason - combined with his lifelong policy of taking only the best commissions - he was far less prolific than Mozart. But no matter - the music he did leave us, from solo to chamber to orchestral works, is the most substantial and profoundly moving expression we may ever hear.